The Sport of a Lifetime

In Archery we always say all ages and all skill levels and honestly that is true. However, field archery can prove a bit difficult for the physically disabled as it involves bushwalking…. So lets modify it to say – If you can bush walk you can probably do field archery.

Archery promises the thrill of the great outdoors and the rewards of year round individual and family fun, from beginner to expert, friendly recreation to intense competition. To top off all that, archery is just plain fun. Whether you’re wandering the bush bowhunting, or shooting in Target, Field or 3D competition, there is a form of archery you’re guaranteed to enjoy for life.

People who play Archery are people just like you. Truck drivers, retirees, plasterers, teachers, salespersons, electricians, bankers, home makers or students etc. may choose to participate. Archery is played in a social setting and in a relaxed environment. This means that although the sport is demanding both physically and mentally, you will enjoy your day outdoors with like minded people.

Archery is a family sport

Equipment used in archery is made to suite all participants regardless of gender or age. Archers are graded according to their ability; this means that with properly matched equipment, competition is fair for all participants. Participation in archery as a family sport is relatively inexpensive, with the added bonus that all members can participate at the same time. It is also a very healthy outdoor activity.

Prior to commencing to shoot our ranges, you will be required to undergo appropriate training with a qualified club instructor. Only when your ability has been assessed as competent, by the club coach, will you be allowed to shoot on the club ranges. These requirements and precautions are in keeping with Lilydale Bowmen Inc.’s affiliation requirements set down by our national governing body; Australian Bowhunters Association (A.B.A.). You must be an ABA member prior to being accepted as member of Lilydale Bowmen Inc. As a member you are covered by our national public liability policy. 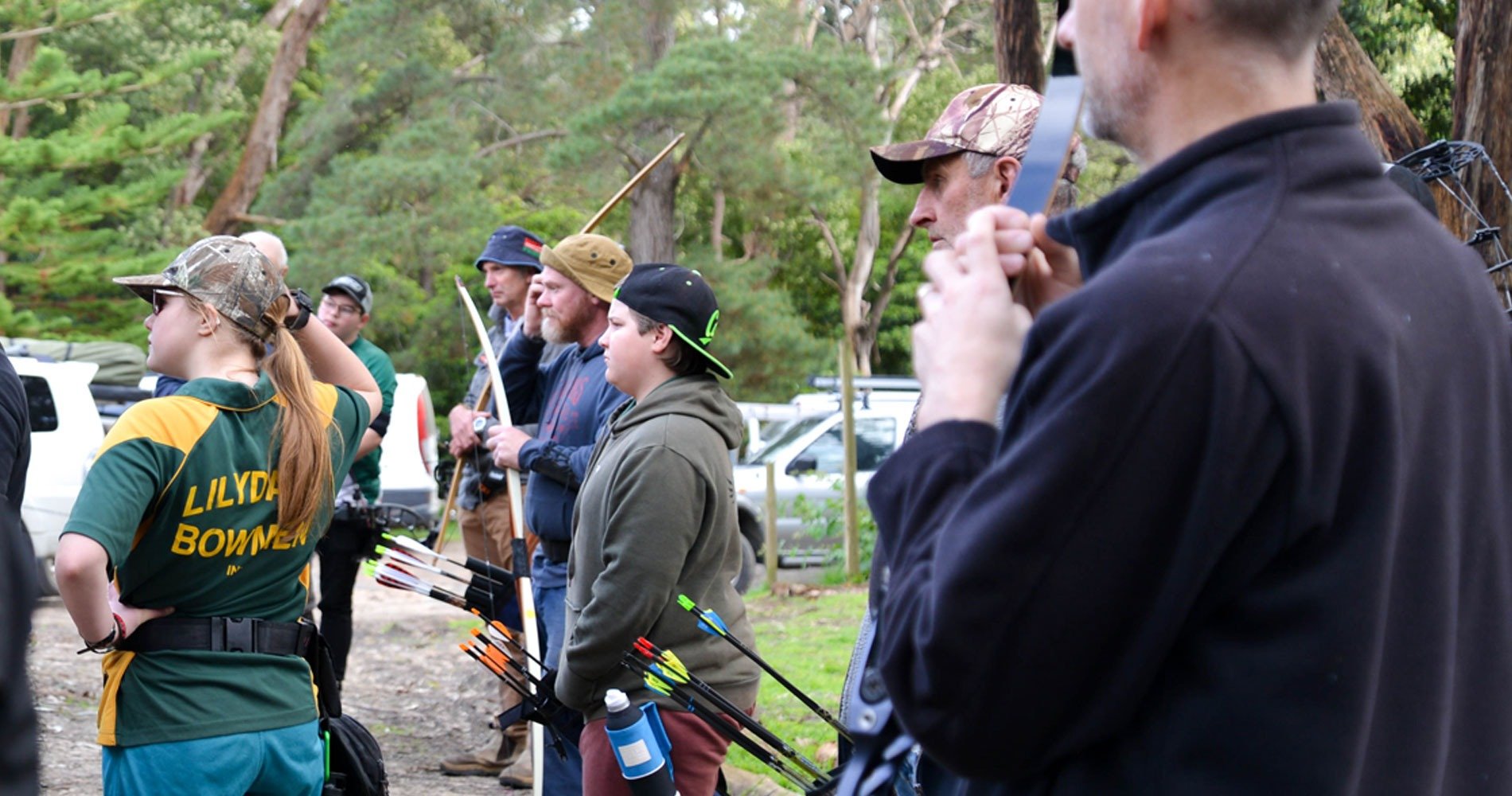 The archers form small groups (3 or 4 people) and proceed through the course shooting and scoring as they go. Then they move on to the next target and so on. The number of targets vary from 20, to 40 with one to four arrows are shot at each target depending on the round.

Depending on the round being shot, with the number of archers and the terrain, a round will be of 2 km to 5 km and lasting one to three hours.

Safety First, & then,
ENJOY YOURSELF!

Shot with fingers and sights the recurve bow is fairly simple in its basic form but like all bows they can feature incredibly advanced technology with upgrades like carbon limbs and machined risers, stabilizers and more. Popular with target archers and also used in field competitions. This the bow style used exclusively in the Olympics.

The most modern bow type this bow is mechanically operated by pulleys, cables, and cams that help archers hold heavy draw weights at full draw. Compound bows are known for their light weight and accurate speed. Made with materials like aluminum, magnesium, carbon and fiberglass. This is the most popular bow for Bowhunting.

Straight from the medieval era, the longbow excels in its simplicity. Essentially, it’s a long wooden pole with a string on both ends. The longbow is the most difficult bow to handle and shoot accurately. As the bow gets longer, the draw weight also increases. These bows required incredibly strong archers in warfare and provided deadly power.

In the Australian Bowhunters Association there are a number different type of disciplines. These are covered on ABA’s website by a brief synopsis of these different disciplines and pictures that indicate the type of target used for that discipline. In some of the disciplines there are a variety of target faces or moulded rubber animals used.

The National Barebow and Sighted Round

Because each type of equipment performs at a different level, it is only fair that scores are compared between comparable equipment. During competition, archers are divided up into several categories based on their age and equipment, and awards are distributed based on scores within those categories.

Barebow – Longbow or Recurve, no long attachments (no sights or long stabilizers).
Freestyle Unlimited – Any type of bow, sight or release aid is permitted.
Freestyle Limited – Recurve & Compound, but no mechanical releases
Competitive Bowhunter – Compounds allowed, but no sights or stabilizers
Bowhunter Unlimited – Any type of bow and release aid is permitted & limited sights are allowed
Bowhunter Limited – Same as Bowhunter Unlimited except that the release aids are not permitted.
Traditional Longbow – No recurves or compounds allowed, just longbows
Modern Longbow – No compounds allowed, no mechanical releases.
Historical Equipment Division – A bow recognised as being in use preceding the year 1900

At Lilydale Bowmen we stand to promote the spread of archery in its many forms, including competitive target shooting, bow hunting, and personal practice for fun, exercise, and meditation.

If you’re interested in the sport of field archery then we’d love to hear from you.

Lilydale Bowmen Inc. is a sporting, not for profit club that encourages the use of all forms of archery equipment and styles: from traditional barebow to modern compound “unlimited”. It also supports the responsible and ethical pursuit of archery in its ultimate historical endeavour – hunting.

We regularly run our introductory course with our qualified instructors.